By Lizzy Barber on

My debut novel, My Name Is Anna, is told through the eyes of two narrators: eighteen-year-old Anna, a religious young woman in rural Florida, and sixteen-year-old Rosie, a born-and-bred Londoner. For me, a dual narrative is a great way of creating dramatic irony, revealing facts or clues in one narrative that the other isn’t privy to, and providing light and shade that can help drive the plot forward.

Here are some of my favourite thrillers featuring multiple narrators. In Gillian Flynn’s most well-known thriller, the dual narrative is used to create what is, for me, one of the best twists in the suspense genre. The reader follows Nick – already an unreliable narrator – on his quest to find his missing wife Amy, only to be punched in the gut by the narrative halfway through when we hear from Amy’s own voice. Brontë’s classic gothic fiction is told through the eyes of Thrushcross Grange’s gentlemanly new tenant, Mr Lockwood, and its long-time housekeeper, Nelly Dean. Again, Lockwood is an unreliable narrator, only reporting what he hears and thinks, but as the ‘outsider’ he acts as a guide for readers, mimicking their own distance from Cathy and Heathcliff’s story. Nelly, however, is an eyewitness narrator, injecting a sense of intimacy with the characters, and giving far more energy and dynamism to the plot than Mr Lockwood ever could. 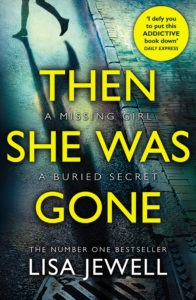 Then She Was Gone by Lisa Jewell

Then She Was Gone is the heart-breaking story of a mother’s search for her missing child. In the present day narrative, we follow Laurel, ten years after the disappearance of her fifteen-year-old daughter Ellie, as she slowly uncovers the truth about what really happened to her child. Jewell mirrors this by also taking us back ten years, seeing the disappearance played out through Ellie’s own eyes. The two plots are skillfully weaved together to create a feeling of racing against time, with the duality creating a great poignancy as we see mother and daughter years and worlds apart. King’s first published novel had a great effect on me, and I was deeply inspired by its central mother-daughter relationship in the creation of Anna and Mamma in My Name Is Anna. Here, the story isn’t just told by several narrators but in several different formats, including police reports, transcripts and newspaper clippings. This patchwork narrative can feel disjointed at times, leaping about from one page to the next, but it gives the impression that the story is a living being, the tale of a whole town as much as one girl. From the first line of Leila Slimani’s terrifying tale of good-nanny-gone-bad, one might think it would be impossible to find sympathy with Louise, who we know from the start has murdered her young charges. But by flipping the third-person narrative between the children’s parents, Miriam and Paul, and then back to Louise herself, Slimani creates pathos for this fragile and deeply troubled character. The Party by Elizabeth Day

The Party is a Brideshead-esque exploration of classism and social anxiety. Its primary narrator, Martin Gilmour, is a working-class boy thrust into a world of money due to his long-time infatuation with his best friend, Ben. Day’s Martin is an unlikeable chap – pompous, jealous and generally unreliable – whose characteristics are enhanced through diary excerpts from his long-suffering wife, Lucy, her narrative lending an opposing roundedness and sympathy to the plot. 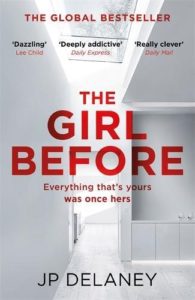 The Girl Before by J P Delaney

J P Delaney’s psychological thriller is a taut tale of two women and the strange house they find themselves living in. The plot uncovers the story of Jane, the titular ‘girl before’, by playing out her story in her own narrative, alongside the parallel discoveries of the house’s current occupant, Emma. The dual narrative amps up the tension and creates brilliant opportunities for doubling, as the reader sees Emma playing out the same terrifying path as her mysterious predecessor.

Read the first two chapters of My Name is Anna by Lizzy Barber here. Lizzy Barber studied English at Cambridge University and works as the head of brand and marketing for a restaurant group. Her debut novel, My Name is Anna, was the winner of the Daily Mail crime writing competition and she is currently hard at work on her next thriller. Lizzy lives in London with her husband.